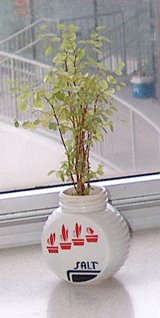 Last night's dream...
Doug and I were traveling in the city and we had to swim through floods and roadblocks to get where we wanted.

We stopped and hung out at an antique shop that was temporarily closed because of heavy rains and flooding. I was looking around in the store as the lights were dimmed and I recognized some pots and cute containers that I had sold to the shop months ago. I had started little plants in them from cuttings and sold these immature plants in teeny tiny darling little vintage containers to the shop owner. They had remained on the shelves all this time and had grown into beautiful, mature plants.

This made me happy and I planned on returning to the store as soon as the flooding was over to buy back the containers that I had sold. The shop owner had kept them all this while and let them thrive. So the idea of paying for something that I had intended to sell and make a profit for, didn't bother me. I'd just paid him to tend to my plants and was grateful no one else had purchased them.

This is interesting because last night a little round vintage salt shaker container that a lacey plant was growing in got knocked off our windowsill by accident. It was sitting on my kitchen sink windowsill at home for a long time and Doug brought it here to stay by my bedside window at the hospital. It broke into many little pieces. We felt terrible about it. The plant is fine, though, and I'll just transplant it into something else cute.

So back to my dream. Doug and Bimp were waiting for me at a restaurant. I had to walk up the back way of the entrance, climbing rocks and big AC equipment, dodging under wires. But I could do it. I was still big around the middle because of the pregnancy, but I had the strength to climb to meet them. And no one was reaching to help because I didn't need any. Doug was standing on top of that hill, holding Bimp in a carrier. And they just smiled and waited patiently for me to get up there.

In both instances, I had to get to my destination either with Doug or by myself. First, while dodging floods and swimming through them. Then by getting there the back way, not at the front entrance. Both circumstances were less than ideal, but I did it and didn't panic.

The prize in the end was glorious.
Doug smiling and holding our baby in a carrier, both waiting for me at the top of a hill, of which I am climbing successfully.

Wow, Anne! Just discovered your blog today..the phones were slow at work & I read most of it. You have a special place in the Jude's lives & I want you to know that you've been in my prayers. Thank God you have a laptop & a gift for searching your feelings & conveying them. Your family is great & you & Bimp (the bump?)will make it. So much love surrounds you & Doug...What a guy!! When you're back on Brandy Turk, I'd love to bring you & Doug dinner, & hopefully, sneak a baby fix holding Bimp for a few minutes. I know I'll have to get in line, because Nanny won't want to let him go, nor will you or Doug. Have you seen wool knitted diaper covers? I'm sewing buttons on one for Silas now. They're wonderful...no leaks overnight.

honey, that is the coolest dream. i would like to have one like that -- can you help arrange...maybe lend me a little estrogen?

and thank you for not identifying yours truly as being the klutz who broke the vintage salt shaker. that was very kind of you. i'm glad you're not keeping score on all the stuff of yours i've broken over the years.

yes, from frail little salt shakers to 12-foot aluminum ladders, you can count on me to render it useless in a fit of stupidity.