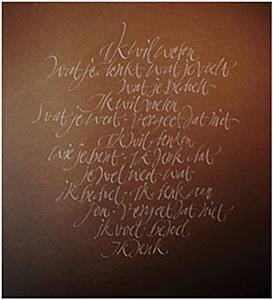 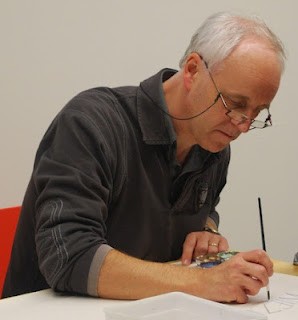 This is a recent proposed logo I did for Malachi's Storehouse, a food kitchen to feed the hungry.
Below are some details of the history of the hand, why it was chosen, and why the u served as a metaphorical and visual portal.

The calligraphic hand chosen for this logotype is called Blackletter. It's what Gutenberg set his first printed copy of the bible in and is also what the monks used so long ago when illuminating manuscripts on vellum.

Blackletter today has many variations to ease in its legibility and to suit each artist's creative flow. It's typically seen as very tall and blocky and monks used it because ink was less expensive than vellum. They could cram in as much text as possible on the page, while still emoting a message. It was beautiful looking, but at times difficult to read. This particular variation has a softer, rounder, more horizontal, and fluid feel. It's masculinity is balanced by an equally strong feminine flow and swing - look at the tails and endings to the ascenders and descenders.

My variation features a strong vertical mass for each letterform and most are linked together to give a very strong feeling of interconnectedness and unity. This is how I see Malachi's Storehouse and the parish. The letterforms also remind me very much of the architectural style of Saint Patrick's. Grounded, earthy, solid, reaching upward, but with a horizontal flow that echoes the inner flow of the building.

I chose to extend the u in house and make it appear as a threshold, entrance and exit - it is the very idea that Malachi's is a place to give and receive and both apply to all involved. It is a conduit. This threshold is also a metaphor for the altar, where time and space intersect. And it is also the space within each of us where the capacity for generosity both in giving and receiving live. It is one of Saint Patrick's unique talents and each person/letterform stand united in this idea. The letterforms are all unique, yet linked and holding hands. The tail of the e also gives a major nod to it's ancient Christian roots and purpose. 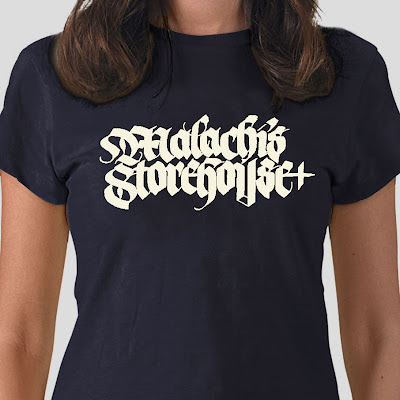 Just a heads up about 4 new classes that begin next week at Binders.

We have two Bookbinding One classes: Tuesday afternoons and Tuesday evenings.

The Wednesday evening Italic class is full, but we've created a waiting list for an overflow class on Thursday evenings. To sign up for the Thursday night class, you'll need to contact Jacob Gunter at Binders to get on the list. We have two folks interested right now and all we need is a third for it to make.

Below is more information. Happy summer to all!!

The Italic calligraphic hand is one of the most widely used and versatile alphabets around. It is highly legible and can easily be dressed up or down. Italic is the perfect hand to learn for the beginning calligrapher yet versatile enough to experiment with for the advanced. Students will be given handouts and guide sheets, learning the upper and lower case characters. We will also address spacing and layout for addressing envelopes. Calligraphy is less about pretty handwriting, but more about DRAWING each and every letter. It's about establishing a pacing and rhythmic motion as you write - giving you a consistency of shapes and letters, and spaces in between words and lines. 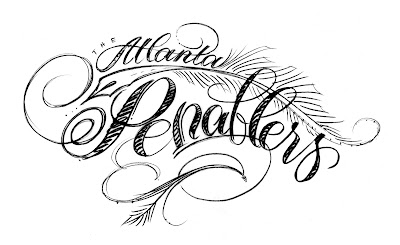 Join us for our very first Atlanta Penablers meeting!

What to Bring:
• A snack or drink to share
• Your recent work (optional)
• Your Bad Self

To participate in the guided activity after the demo, bring: pointed pen and nib, Finetec gouache set or other inks/gouaches, brush to load your nib, pencil, eraser, and dark cover weight paper.

Membership to Atlanta Penablers is free. To become a member, contact Jacob Gunter at Jacob@BindersArt.com or call 404.237.6331 x203.

Below is Victoria's yummy description of her presentation during the first Atlanta Penabler meeting July 6th. If reading this doesn't send calligraphic shivers (the good kind) up and down your spine, come to the meeting to see what all the fuss is about!

"Victoria Lansford will demonstrate her unique style of pointed pen flourishing with Finetec metallic gouaches and share with you her techniques for building dramatic shapes, letter forms, and large cartouches on dark colored papers. She'll also show how she mixes and combines colors to make compositions pop as well as some handy tricks for making Finetecs and other paletted paints easier to work with and take on the go."

Artist, educator, author, and publisher, Victoria Lansford creates one-of-a-kind wearable art and art objects that evoke the mystery and splendor of ancient masters, yet are infused with her own provocative vision. Her award winning work has appeared in numerous juried and curated exhibits, books, and magazines, and her instructional publications have sold throughout the world. Her artwork is available in galleries in the USA and at VictoriaLansford.com. -- Victoria Lansford Artist, metalsmith, calligrapher, educator, and author of the Metal Techniques of Bronze Age Masters instructional book and DVD series and the iMakeJewelry iPhone app™ www.victorialansford.com 404-388-8348 Connect with me on Facebook on Twitter on Crafthaus and on Google+