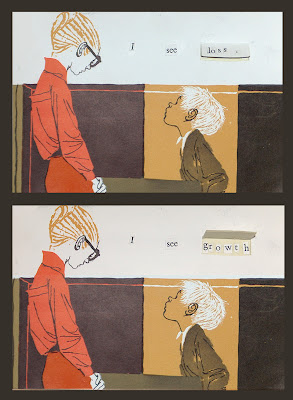 I have been thinking a lot of Tommy lately. Don't know why. The anniversary of his death comes in August. When the weather gets warmer each Spring, he comes to mind. Every year.

It's a good kind of pain to feel. To miss him. To be mad at him. For leaving in such haste, for leaving us out, for saying goodbye with a sneer.

I think suicide gets a bad rap. It doesn't get the respect it deserves. I think each case is different and I don't have any choice but to accept his decision to leave us. Even if it meant hurting us. I have no right to judge his choice. I don't know the depth of his pain. I wasn't him. I don't even know if he had the power to change - like I think I do.

I read Sylvia Plath in bed last night. I can only take her in little bits. She's so heavy. So acidic. So beautiful. She's masterful. I think of the gift she left before she succeeded in taking her own life. Tommy tried several times, too. But made sure the last was what he really wanted.

I think he was tired. He wanted peace. I think he deserved that. Everyone deserves peace. He just never found it here. Could never hold onto it as long as we manage to. At 34 he felt ancient. Bitter and wounded. Caustic. Toxic.

Sylvia left a legacy. Her work will live on forever. Who am I to judge her departure when she did such a beautiful job of expressing her pain. I have to respect her. I can learn from her pain. There is value in pain.

Tommy left a legacy, too. He burnt a lot of bridges, yes. But for as many ways there were to hate him, there were more ways to love him.

There is a gift in loss.
There is a usefulness in every bad thing that happens.
The lessons to be learned are the ones I let touch me.

But I would rather be horizontal.
I am not a tree with my root in the soil
Sucking up minerals and motherly love
So that each March I may gleam into leaf,
Nor am I the beauty of a garden bed
Attracting my share of Ahs and spectacularly painted,
Unknowing I must soon unpetal.
Compared with me, a tree is immortal
And a flower-head not tall, but more startling,
And I want the one's longevity and the other's daring.

Tonight, in the infinitesimal light of the stars,
The trees and flowers have been strewing their cool odors.
I walk among them, but none of them are noticing.
Sometimes I think that when I am sleeping
I must most perfectly resemble them—
Thoughts gone dim.
It is more natural to me, lying down.
Then the sky and I are in open conversation,
And I shall be useful when I lie down finally:
Then the trees may touch me for once, and the flowers have
time for me.

Yes. YES. I too think suicide gets too much of a judgmental rap. My sister (half sister) killed herself when I was in 9th grade and because of it I have an entirely new evaluation of it. I could go so far into my thoughts on it but it would be long and rambling. So, just: thank you for saying what you did.

i feel the same as katie about what you wrote. it made me think about a lot of things that i plan to blog about next week.

Sorry to hear about your sister K. Please share your long and rambling thoughts? I wanna hear them.
Yours, too Sarah!

Hello A-D. I must have started reading your blog late because I didn't know about your brother. I also think suicide gets a bad rap. People say it's selfish, and perhaps it is, but I also believe some are destined to take their own lives -- like Sylvia and Anne Sexton. I've had friends attemp suicide -- and contemplated it myself when I was about 17.