A Conversation with Anne Elser

Just read Ian Boccio's new Artist & Instructor: Anne Elser story on the Binders Art Blog... a really engaging interview and just as much fun to read. Thanks Binders! Thanks Ian!

Artists and Instructors at BINDERS, #1: A Conversation with Anne Elser 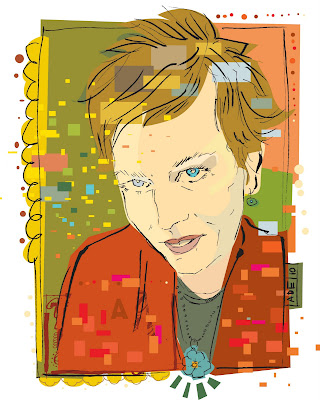 BINDERS is privileged to host workshops and classes with instructors like Anne Elser, whose depth of knowledge and level of craft skills are exceeded only by her accessibility and sense of play.

If you've ever been in the store in the evening during one of her calligraphy or bookmaking classes, you may have heard bursts of laughter coming out of the gallery where her students are learning new forms of artistic expression and having a great time. We catch up with Anne this week and find out a bit about what motivates her to teach in her unique style and how she relates to her craft.

BINDERS: Tell us a bit about where you're from.

Anne: I'm from Atlanta. When I was about three my parents moved down from the north and got a little house in the suburbs, Dunwoody, back in '71, and about ten days after they moved in my brother was born. They just moved out of that house last year!

BINDERS: As an artist, what do you think about the scene in Atlanta?

Anne: Actually, I'm just now re-emerging into the artist community. There will be a show in March at the Kai Lin Art Gallery. Yu-Kai Lin has this new gallery where they do an accelerated show cycle and he works with new and emerging artists. I met him through my bookmaking and calligraphy classes and started selling some handmade books at his gallery. After a few rounds of therapy I reached a place where I started painting again. The show is called "Grace", it's a group show with three women artists, and I'm doing a series of eight paintings about enlightenment featuring very ordinary domestic objects and images, along with some books that have painted covers. So it's like all the skills and types of art that I've learned are coming together into one person and one career. It's amazing!

BINDERS: When you were in art school, what were you studying?

Anne: I studied painting and ceramics, then after school I moved out to Albuquerque, New Mexico, because I figured I liked Georgia O'Keefe paintings so why not? I did a few shows there and then things just petered out. I mean back then, I graduated in '91, the art schools spell-checked your resume and wished you well and we all followed the stereotype of the starving, mentally challenged artist, but it doesn't have to be that way!

BINDERS: Since that time, you've become very involved in calligraphy and bookmaking, which you didn't study in school. How did that come about?

Anne: I lived in Albuquerque for about three years, teaching art classes for kids (which I love!), but the pay scale and the pace of life out there is just too slow and low and I didn't really have any life skills anyway, so I moved back to Atlanta and my parents generously put me through grad school at the Portfolio Center, where I studied advertising and graphic design, initially thinking it was kind of a sell-out, but I didn't care because I was tired of being poor! The Portfolio Center was a fabulous experience. They teach you how to market creativity, which is a wonderful skill to have, so I was able to market anything after that - most importantly myself! I started teaching at the Portfolio Center right after I graduated, got really great job here in the city at a small advertising firm where I worked for seven years. At the end of the seven years I met and married my husband and we moved back to Dunwoody where I grew up and bought a house. Then my son, Anton, was born (he's three now), and I left the firm and started teaching full time at Portfolio Center, six classes per week. My first calligraphy job was my own wedding! I'd taken a class from Carol Gray at Callenwolde. I got into bookmaking when I audited a class at the Portfolio Center taught by Michael Goodman, who is a wonderful bookmaker here in Atlanta. So that's how I got started and it was about two years ago that I called over here to BINDERS and said that I'd noticed they had fine art classes but no calligraphy or craft classes. The rest is history!

BINDERS: What kind of classes are you teaching at Portfolio Center? Do you teach bookmaking there?

Anne: I did teach a couple of bookmaking classes there, but I've incorporated the craft into a class called Production, for the first quarter students, just to introduce them to the joy of actually making things. The Production class at P.C. used to be about making a perfect white box with perfect bevelled edges, but that just wasn't my style. Maybe if it was a pink box... That's why I bring them over here to BINDERS and say "If you're going to make a perfect box it might as well be fun!"

BINDERS: You said your first calligraphy job was for your wedding. Was there something about that particular experience that made you want to start teaching calligraphy?

Anne: Calligraphy was something I knew very little about. Once I got the job out of grad school I decided I was going to take a yoga class, a tap class and a calligraphy class - I quit smoking, I started knitting, it was just that kind of time. But calligraphy is a very metered, measured, mastered sort of craft. It's like yoga, very meditative, and yet you've got to learn the rules for each hand before you can go crazy, which is what I'm doing now. The first ten minutes of that first calligraphy class I was convinced that I wasn't going to like it. I mean, you had this white pad of paper and guide sheets and everything had to be just so. I just thought 'oh well, that's $120 out the window, but it's OK." Then, by the end of the class, I loved it! You get into a rhythm of making marks over and over again, then threading those marks into letters and words, and then you can write anything you want. It's just another way to visually interpret a beautiful, or achingly sad, idea.

BINDERS: What drew you to take the bookmaking class from Michael Goodman? Was it part of that same time period?

Anne: That was later. Three months after my son was born, I went back to teaching. I'd had a very difficult third trimester in the pregnancy and had to be in the hospital and on bed-rest a lot. I was so weak I couldn't even walk up a flight of stairs without getting tired! So when I went back to teaching I also wanted to do something for myself and I thought Michael's Wednesday night class would be perfect because I love sewing and needlework and paper and it was like all those things rolled into one. I took the class right alongside the students I was teaching in other classes. It was really therapeutic, by the time the class was over the stairs were no problem! It was a healing experience.

BINDERS: What kind of students do you get in your bookmaking classes here at BINDERS?

Anne: Mostly women. I think there have been like two guys in the past, but they can range in age from late '70s to early 20's, the ready-for-graduate-school type of person. It's funny though, the first two nights of any class that I teach here I'm the only one talking and everyone's really quiet, watching the demos, and then all it takes is for me to make one error and have to say "Oh wait everybody, go back to step two," and then we start laughing and talking and by the end of the six week course we all know each other pretty well. All of these classes are treats, they're a form of self-love for anyone who takes them on. We talk a lot about life.

Anne Elser will be starting a new series of bookmaking and calligraphy classes during the 4th week of February, 2010. Check The ART School at BINDERS schedule online to get more information and sign up, or call the store and reserve your space over the phone!

Great interview. Nice to learn more about your journey.

Thanks! After reading the interview, I managed to surprise myself all over again listening to the story. It amazes me that just be being human, you're living your own story, making history with every step you make.