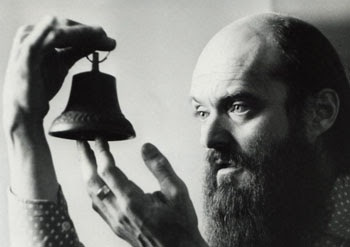 This weekend Doug and I rented There Will Be Blood. Daniel Day-Lewis was masterful as always. Completely transformed himself.

I was deeply struck by the soundtrack, too - dug a little deeper and discovered the composer Arvo Part. Below are some amazing things Arvo has said about composing, creativity and being open to space(s) I read in this article, where the author talks about the Fullness of Emptiness.

For all you designers out there: When he talks about rests, you can translate that as white space.

"I have discovered that it is enough if a single note is played beautifully. This single note, the sense of peace or silence have a calming effect on me." (p.4)

One word suggests more than two ever could. Candlelights will always be sexier than floodlights. Emptiness yields. The blank page tells every story, which is why writer's block is so overwhelming: we tremble before the mystery of our own omnipotence. Lao Tzu: "The Master says nothing, and leaves nothing unsaid."

"My music was always written after I had long been silent in the most literal sense of the word. When I speak of silence, I mean the 'nothingness' out of which God created the world. That is why, ideally, musical silence is sacred. Silence is not simply given to us, but in order that we may draw sustenance from it. This sustenance is no less valuable to me than the air I breathe. There's an expression: to live on air and love. I'd like to rephrase this: if you approach silence with love, music may result. A composer often has to wait a long time for this music. It is this reverent sense of expectation that constitutes the brief silence of which I am so fond." (p.5)

I have studied a little bit of neuroscience, enough to know that we do not experience things, but the differences between things. We see boundaries, and our brains conserve resources by assuming the rest. So when I say that no sound exists without silence, I mean it in the least metaphysical, most flesh-and-blood way possible. To experience is to compare. We owe all of our music to silence, even if we never stop to thank it. The single piece of advice common to every musician, no matter the instrument, is to play the rests. Play the rests.

There is also, however, a silence beneath silence. The rests emerge in this openness, the deeper silence in which we make our comparisons. Needless to say, you cannot hear it. But maybe you should try.
Posted by Anne Elser at 6/08/2008 11:11:00 PM

Huh.
I suppose all my chatter could be considered silence as in white noise?

Thanks for the post anne, very cool. I too was really impressed by the score, it was so emotional and gave me so much anxiety.

i hope you are well..
Has that hasta grown much the past two summers?