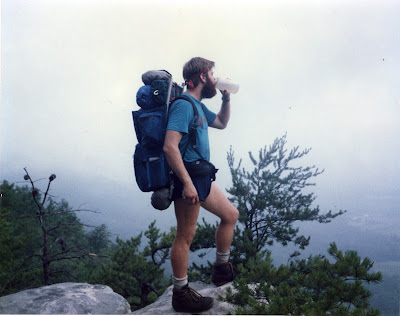 This was the last of Tommy's Appalachian Trail journal entries. Shortly after he completed the trail, he drove from Atlanta to New Mexico to meet Kaija. They married and had a child of their own named Nathanael, who today is a thoughtful and poetic young man, and a talented artist.

Tommy and Kaija eventually divorced. They shared joint custody of Nathanael out in NM. I lived with Tommy briefly after graduating from Art School.

Tommy remained an electrician and developed a rich circle of friends and community out in the rugged atmosphere of NM. He flourished there until his last battle with depression tumbled down upon him. He took his life in August of '97.

Dad, Mom, Peter and I went out to settle his house shortly after the funeral. Amongst his things, I found his AT Trail journal and kept it in safe keeping, knowing I'd want to read it someday.

A year later, as a memorial service for him, we and two close friends gathered together in the spot where he stood in 1987, marking his first step on his hike through the trail, from Georgia to Maine. We all took turns reading his journal aloud that day. 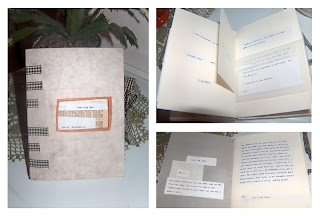 Shortly after, I took his journal out again and keystroked the entire piece. A year after that, I bound the text in a handmade book. This year, I posted his entries on my blog and e-mailed it to family.

The picture of him you see is how I envision him now in heaven. In his element. On top of the world.

I dedicate all of this to Thomas, and to every person who knew and loved him.

Here at Campbell Springs Shelter. Though it's not a shelter at all. It's a cabin with a fire place and a wood burning stove. THIS IS GREAT!

Let me give you a run down of the past couple of days events.

The day before yesterday morning, we left the Doyle Hotel, built in 1909 as a ritzy and very expensive hotel. It's now nothing more than a haven for hikers. A bar with 400 beers. A room that hasn't been cleaned in 30 years. A bathroom down the hall with a large old bathtub and hot water. Like I said, a haven for hikers. Oh and I almost forgot. All this was for a low $7.00 a night. WOW!!

Anyway, we left the Doyle heading south. Yesterday was the 15 mile road walk with an additional 8 in the woods to boot which made the day a 23-miler.

We had a few cheerful moments though. At about half way we passed the infamous Ice Cream Lady's house. She came to the door with pleasant greetings and opened her house to us (her name is Bonnie). She left for a moment and soon returned with juice and ice cream and photos, log books and stories.

We soon left knowing we had miles to go and limited daylight.

We arrived at the cabin around 6:00 PM sundown. I was cold, tired and hungry.

All of a sudden I heard voices coming from the cabin. Excited voices. I looked up and saw Sunshine and Daydream (Gary and Anne). I came alive, I thought I'd never see them again but here they were.

They finally caught up to me. We had a great evening reminiscing and so comfy in that heated room.

Gary and Ann left this morning. They wanted to get to H.F. as fast as possible. Can't blame them. Jason and I chose to stay another day in this heated Delche.

At 6:00 PM we hiked back to the road about half a mile and saw a house about 1/4 of a mile away. We decided to go and ask to use the phone to order a pizza. They (Dr. Wood and Mrs. Coldfresh) answered the door AND invited us in. Jason called and said that no pizza place delivered out that far. Boo hoo.

When the Dr. heard this he said, "My wife and I are going out to a dinner party right now, but here's (going to the freezer) some frozen pizza and there's chocolate cake on top of the fridge."

Jason and I were speechless. All we could do was move our lips in thanks.

They left and we ate, quietly alone in someone's house. We just met 5 minutes ago. In awe, at the trust he had in us.

Jason and I walked back to the cabin.

I was thinking how good life is.

We leave tomorrow with a 23 mile day.