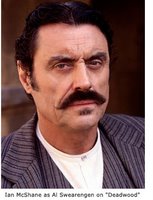 ~:D E A D W O O D:~ I am in love with this man. Al Swearingen. He's a grimy, slimy son of a bitch whose great gift is making a profit. But underneath his crude exterior, he's no better or worse than any of us. That's how we see most of the other characters of the show. We see how they struggle and sometimes do the right thing. But mostly the wrong thing. I find that fascinating. I'm talking about HBO's DEADWOOD.

To truly appreciate the story of Deadwood (or the struggle of our own lives, for that matter), one must first understand and appreciate the mistakes we all make. And no one said it better than H.G. Wells: "Moral indignation is jealousy with a halo." After finding that quote, my life was changed for the better, I believe. No shit. It changed the manner in which I asses people. And that is to NOT do it in the first place.

David Milch, director/creator/executive producer, etc. is a genius. The way he uses language is fascinating. It took us about three episodes to get into the rhythm of their speech and understand just what the fuck people were saying. It's like going to see a Shakespeare play and getting used to that way of speaking. Or watching a film with subtitles. It's laborious at first, but once you get the hang of it - you're really into it.

The characters of Deadwood use the most foul language imaginable. Cocksucker is the term most used to refer to anyone in the least bit annoying. Cunt is the second - to describe either male or female. And pussy or twat is used to refer to the many whores who live there. Any time one wishes to emphasize absolutely anything they're talking about, the term fucking is used before or after the word or situation needing emphasis. Having said all that, being able to stop flinching at the foul nature of the language was tricky, too. David Milch talked about how language was one of the few resources people had at that time. Hence, the long-winded, flowery and frequently foul manner in which people expressed themselves. It was a way to say either "Don't fuck with me - I'm smart." Or "Don't fuck with me - I'm dangerous." Achhh. I fucking digress.

Back to Al. People flock to him because he is a strong leader. He is both loved and feared. There is a charm and wisdom about him that one can easily ignore. But once you get past his faulty exterior, there's a humanity in him. I see myself in him - with all my flaws and defects out there for everyone to see. There is a desperate criminal in all of us. I truly believe that. And every "monster" has his virtues. Monsters are not all bad. None of them are. Fear and self-righteousness keeps us from really knowing them, identifying with them, seeing ourselves in them. Find their humanity. I grew up with one such monster. Tommy would have ended up in prison, had it not been for his dying. He made a choice. Learning to respect that choice tops my new year's resolution list each and every year. 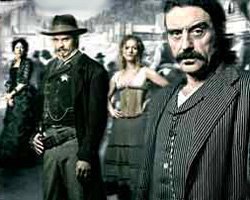 But back to Al again. The one thing I admire most about Al is that he TRIES. He works at it. Though his motives and manner may be undeniably flawed, he is still motivated to move, to make things happen, to try and try and try again. I think that is the lesson in this series. Trying is how this great, noble and flawed nation of ours got goin'. And it is through that continuous trying that we will adapt and survive.

I will leave you with one more quote from H.G. Wells: " If you fell down yesterday, stand up today."

a-fucking-men. Deadwood also teaches us to be weary of people who know pig farmers. yikes!