~ : C H U T E M E : ~
Tommy, forever playing jokes on me when we were kids, continued to do so well into adulthood. As we matured, his jokes grew more sophisticated. He performed these pranks on a whim of brilliance and without fear or hesitation. It was marvelous to watch and even more to be the victim of one. He'd do it all without cracking a smile. A masterful performer. It's the thing I miss most about him. 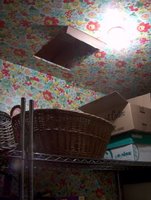 The prank that still gets the most laughs involves a scary movie, a circuit breaker, a very late night, a laundry chute, and lastly, a variety of strange-looking kitchen utensils. It happened one summer night when I was home from college. Tommy was also home and we spent that summer watching rented movies late into the night. They were fun memories. Tommy usually lasted through all the movies, while I ended up dozing off and retiring earlier than he. We'd do marathon movie sessions - rent an armful of VCR tapes and watch them back to back. Ever done that?

One night we were watching a horror movie (his favorite genre) that he had chosen. It was called Dead Ringers and came out in 1988. An incredibly creepy and well-made movie where Jeremy Irons played two brothers: identical twin gynecologist surgeons, Doctors Mantel, who shared the same life without anyone knowing. Obviously, they're screwy in the head, which makes the whole movie interesting.

These doctors specialize in female infertility. And at one point, one of them has a sculptor create a set of gynecological tools made for mutant women, like who have two vaginas or whatever. Ish! It's creepy as hell. And it was soooo well done. The beginning credits feature a red background with drawings of these tools. You don't know what they are - only that they are different and obviously custom made, had unidentifiable shapes with menacing moving parts, handles and latches. They are featured laying side by side on a red surface. It isn't until later in the film that you discover what they are and what they're for.

SO. Back to my story. We finish Dead Ringers. I'm creeped out. It must have been something like 2AM and I'm tired and say goodnight to Tommy. I sleepily drag myself upstairs, while in the back of my mind, I'm mulling over the contents of the disturbing movie I just saw. I get my PJs on, brush my teeth, wash my face, and then sit on the toilet for a few minutes or so, trying not to dose off. Our house was calm and peaceful. Mom and Dad are fast asleep. All I could hear was the whirr of cool air coming from the air vent, maybe the sound of crickets, and the muffled voices coming from the TV Tommy was still watching.

Just as I begin to dose off, I hear a loud "CLICK" and poof - the lights GO OUT in that windowless bathroom. There I am in the dark, pants around my ankles, legs tingling from numbness because I've been sitting there for too long. I'm thinking, "this is weird..." as I blink in the dark. And I sit. And I wait. As it turns out - Tommy was underneath me all that time, in the laundry room, where the circuit breaker (which he had just shut off) is conveniently located. His innocent seeeestor (as he used to call me) was sitting alone. Naked from the waist down. On the toilet. In the dark. 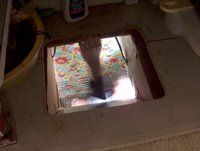 The next sound I hear is something I can't really describe in words. Remember the shriek the monster made just before attacking Sigorne Weaver in the movie Alien? Remember the throaty deep vibrations of Darth Vadar's voice? Or the famous "GET OUT" you heard coming from a haunted house in (was it Amityville Horror)? Well, imagine all those horrible noises combined into one shrieking roar that ended with a Vincent Price-ish cackle. Imagine all those sounds coming from Tommy's deep chest as he hoisted himself up into the hidden hole of the laundry chute in the floor of the bathroom cupboard. The very cupboard in the very bathroom where I was resting. The very cupboard that was close enough for him to growl and punch open the doors of, while reaching over to his left to claw AT MY FUCKING LEGS. For demonstration purposes, my lovely assistant, Doug, has kindly posed to better illustrate the prank.

Now try to imagine the sounds that came out of MY mouth. I was so genuinely terrified to find that monsters really DID live in hidden spaces in your house, under beds, behind curtains and within cupboards. That a monster really COULD reach out of nowhere to claw at your legs while you sit on the toilet. I screamed louder than he growled. I woke up both my parents, who were not happy to be so alarmed, only to find the whole thing was a joke. Of course, this made ME look bad. All Tommy had to do was push my buttons to get me to REACT, which got me, not him, in trouble. Always. And here we are, "adults" still playing this childish game of cat and mouse. I can tell you that if there was any shit left inside of me, he literally scared it OUT of me. Good thing I was on the toilet, no? 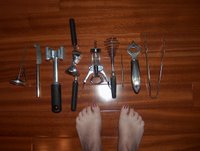 SO! He had a great laugh at my expense. Needless to say I had a difficult time falling asleep that night after such a rush of adrenaline. Who COULD fall asleep after being attacked like that? Well, the joke was not over. Oh, no. The cake needed one last layer of icing: The next morning, I got up really late. Stiffly shuffling out of bed and over to my bedroom door to face the very bathroom that had terrified me so mercilessly the night before, I put my hand on the door knob and look down. This is what I see at my feet on the floor - an arrangement of any odd looking kitchen utensil he could find, neatly laying side by side, with a note written by Tommy, "Doctors Mantel are watching you."
Posted by Anne Elser at 11/01/2005 11:20:00 AM

Oh my goodness this is rich. Tommy, you're absolutely awesome.

ps - I love that there's a Harriet Carter box next to the chute in the ceiling.

K-
Who is Harriet Carter? I have no idea.

That's one of my favorites. I never get tired of hearing that. I also LOVE how much you and Peter laugh while you're re-telling it.
That prank took total commitment. I'm impressed.

Harriet Carter is this terrible catalog with the terrible-est stuff ever. It's great. They're the ones that sell things like vaccuum cleaner covers shaped like an old lady or a toilet paper dispenser that plays the star-spangled banner when it turns. It kicks ass, in a really bad way:
www.harrietcarter.com

Ah yes, but do they carry the P-Mate?

I think that may be too risque for them.