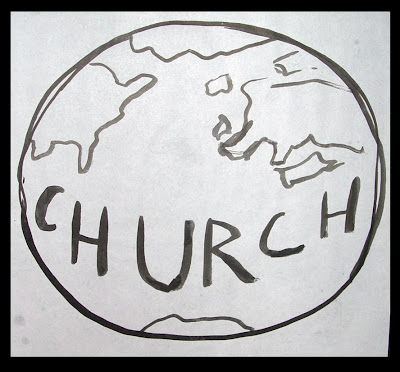 I've done it. Not that any one of you knows, but heck - making it public feels cathartic, so I'll tell you. I'm no longer a Christian. No longer a follower of Christ. No longer affiliated with any religious organization. I've divorced myself from the god I thought I knew. And right now, I know nothing. If feels liberating. It feels terrifying. It's completely new for me. And exciting in that way. But FUCK, it's time I grew up and stopped oiling the machine my family said was God.

On the flip side of all this anger and rage is this new life I'm building to replace the old one that was never mine to begin with. This beautiful image was done by a student named Patrick. Every quarter I give an assignment called the God Poster, where everyone assesses their own spiritual beliefs and cranks out a poster. This was as study he did, and I've kept it for over a year. It hangs in my studio now.

The definition of church has always perplexed me. I never really believed that God only showed up on Sunday mornings, but you can bet I felt the peer pressure of attending church as I knew it back then. I was told that Jesus never listened to angry rock and roll music and that my mohawk in high school reflected badly on my family and the church. I was taught shame and guilt and the ever necessary duty and obligation an only daughter, middle child must carry. And I carried that torch up until two weeks ago. Since then you should see what my stomach has done to me. It's been horrific.

I contacted the church I grew up in, was confirmed in, married in, buried my beloved brother and grandfather in, to tell them goodbye. I did it in love. Without rage or much of a fuss. That evening as I drove to Binders to teach another class (which by the way IS church to me) I cried and cried and shook while clutching the steering wheel and nearly threw up right there on the dashboard of my red minivan.

Saying goodbye to St. Patrick's is the bravest thing I've ever done. I imagine this year will be filled with many other brave steps. So look out world. Catch me if you see me falling too hard.

But dang. Having reached my fortieth birthday with a list of the following really woke me up to the realization that my beliefs about myself, my past, my future and my god just weren't good for me anymore. Since seeing Debra, an emotional intuitive and performance coach, she and I have worked together to find the source of my daily headaches, tail bone pain, blood clots, TMJ, stuttering, acne, migraines, placenta previa, hypertension, and general misery. I'm the sickest forty-year-old I know. I would like to point the finger at one source of all my pain - but really, I signed up at conception for my path and I'm going to continue walking it in joyful responsibility for myself.

So! Here's the part where channel Zoro.

Ask me if I've had a migraine in the past 3 months. NO. (slice through the air!)

Tailbone pain greatly decreased. YES. (another whip through the air!)

Ask me if I've picked up knitting again because my hands no longer hurt. YES. (here I pick up my knitting needles and whooooosh them in the air!!)

I think I am finally beginning to realize who I really am, who I am not, who has failed me, how I have failed myself, who god is to me, who god is not.

I do believe that Jesus of Nazareth was greatly illuminated. I believe I am as much a daughter of god as he claims to be his son. I think all the creatures we worship in so many different ways all round this beautiful world are god. We are all god. I want to love god. I want to know god. Our parents became god to us from birth on. It's only natural to look to them for guidance as our first instinct is to survive. Today I release the myth of god my parents offered me. Today I release myself from anything and everything I thought I knew, thought I cherished, thought would keep me safe, thought I feared.

I open to the big scary nothingness of letting go. I seeing this moment of being lost. I let it take me. I let it guide me. I'll allow myself to fall, to offend, to cry out, to scream and to howl like the angry, beautiful, passionate beast that I am.

I will never, ever tell Anton who god is. Ever. I'll tell him to rather look into his own heart, his own hands, his beautiful face, whether it be sad or angry or joyful. The church would have us believe that we and god are separate. We are not. Never have been. How can you be separate from yourself? It's just not possible.

Beautiful entry, Anne. Wish I could sum up my feelings regarding religion like you just did. I heard a great interview with Julia Sweeney on Fresh Air months ago and keep meaning to read her book "My Beautiful Loss of Faith Story".

anne, as you know, i am a christian. I have realized the many ways God has worked in my life and i cannot deny his existence. it saddens me to read your post. i admire your courage, and i will pray for you to be protected through your journey of seeking truth.

In Buddhism, the concept of God is acknowledged- however the importance of a deity is somewhat irrelevant. Suffering comes from a mind that is not quiet- peace comes from the awareness that all sentient beings are connected.

You have a life that is very connected- with much joy and beauty that is close to you. You have started down a path now, where God isn't necessary- but most importantly, where the future isn't determined by the past, but the present.

No one had to die for you to feel bliss. There is no damnation as a threat for you to do the right thing. You are free to embrace what you have. God is still there- but this god is one of creation and kindness- you will still feel his presence- but through nature, not man.

Hey Molly! I'm going to delve deeply into that book!
Thanks for the kind words. Miss you!

Anon- I appreciate your prayers, though I don't know who you are.

I'm not an Atheist.

I only realize now that the church isn't the only place to worship, love and open to god, who has worked and continues to do so in my life. Rather, it's the atmosphere of fear and the worship of a parental, domineering and judgmental god that I no longer love.

Dear Anon #2. I could kiss your face. You have made my day.

A great post. I know exactly where you are coming from.
I've always believed the correct way to approach spirituality was as a quest, a journey, a search for answers that may, and perhaps should be, unattainable.My problem with churches, of any shape, size or description, is it always feels a little like a club filled with folk that believe they have reached thier destination. These are our beliefs. This is our dogma. Perhaps they have found what they are searching for. I certainly don't feel like I can criticize. I only know that my search continues and that unpacking my spiritual bags St. Whoever's isn't for me.
Besides, I'm not much of a joiner.

The entire service and following its liturgy is so formulaic. I used to find it comforting. Not now, though. It is amazing to be on the other side of things. I can't tell you the difference I feel - the peace and connectedness I have with my environment now. The fights and tensions I have are all within myself. The evil isn't out "there." It's in here and is just the opposite of love. I am working on being one of those trees that are flexible during a storm - that bend with the wind, don't mind getting wet or losing some foliage, who appreciate the thirsty drink and how lucky we were not to be in a drought. I want to be that tree.

I am so happy for you. Having took your "God Poster" class I always wondered what your thoughts were. It was by far one of the toughest projects to tap into because it was so personal. Little did I know that we thought so similarly about religion and faith. Thank you for sharing. I wish you the best on your spiritual journey.

Tree? Personally, I would like to be a houseplant- plastic and not needing water..just the occasional dusting...:)

Mike, do you seriously want to be PLASTIC? Those plants are so icky looking! If I'm gonna be a fake plant, I'll be an embroidered or beaded one, thank you. Sheeese.

Meg, Are you the meg who came to look at my vintage pens or someone else? I thought I sent all my god poster students off with the truth about my own beliefs - remember my Stations Of The Cross studies?
I've been on the verge of a spiritual transition for a long time now. Feels good to really get the ball rolling now. Thanks for your thoughts, too.

I remember when plastic was the material of the future...Now the future is here, nobody likes plastic...:(

Anne, your life is beautiful and amazing and open and alive, and I hope that everything you do in your life keeps it this way.