Here's a little Facebook dialogue sprung from the VP debate. Very inspiring proof of the power of our American Spirit.
Holly, Hank and Jessica - you all three rock hard! 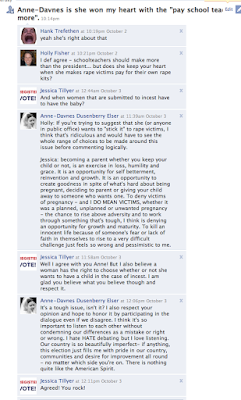 Anne-Davnes is she won my heart with the "pay school teachers more". 10:14pm

Hank Trefethen at 10:19pm October 2
yeah she's right about that

Holly Fisher at 10:21pm October 2
I def agree - schoolteachers should make more than the president... but does she keep your heart when she makes rape victims pay for their own rape kits?

Jessica Tillyer at 12:44am October 3
And when women that are submitted to incest have to have the baby?

Anne-Davnes Dusenberry Elser at 11:39am October 3
Holly: If you're trying to suggest that she (or anyone in public office) wants to "stick it" to rape victims, I think that's ridiculous and would have to see the whole range of choices to be made around this issue before commenting logically.

Jessica: becoming a parent whether you keep your child or not, is an exercise in loss, humility and grace. It is an opportunity for self betterment, reinvention and growth. It is an opportunity to create goodness in spite of what's hard about being pregnant, deciding to parent or giving your child away to someone who wants one. To deny victims of pregnancy - and I DO MEAN VICTIMS, whether it was a planned, unplanned or unwanted pregnancy - the chance to rise above adversity and to work through something that's tough, I think is denying an opportunity for growth and maturity. To kill an innocent life because of someone's fear or lack of faith in themselves to rise to a very difficult challenge just feels so wrong and pessimistic to me.

Jessica Tillyer at 11:58am October 3
Well I agree with you Anne! But I also believe a woman has the right to choose whether or not she wants to have a child in the case of incest. I am glad you believe what you believe though and respect it.

Anne-Davnes Dusenberry Elser at 12:06pm October 3
It's a tough issue, isn't it? I also respect your opinion and hope to honor it by participating in the dialogue even if we disagree. I think it's so important to listen to each other without condemning our differences as a mistake or right or wrong. I hate HATE debating but I love listening. Our country is so beautifully imperfect- if anything, this election just fills me with pride in our country, communities and desire for improvement all round - no matter which side you're on. There is nothing quite like the American Spirit.

Holly Fisher at 4:39pm October 3
Ditto on the respectful disagreeing! I'm not implying that she wants to stick it to rape victims...only that it's hard for me to believe her, to trust that she's going to advocate for my choices and the choices of the people I love, when she believes abortion isn't a valid option for victims of rape or incest. That's only the very beginning of all the things I disagree with her about... many of which have to do with who I am, who I've been since I was born. I fear she can mobilize a Christian Right that is very very capable of filling my world (and yours too) with fear, hatred and discrimination.

In an effort to send you the article about the rape kits, I discovered that she did not know this was happening - that the hospitals were billing the victims, not the police. I sincerely hope that's true, and that, if she knew about it, she worked immediately to change it. So, I withdraw my "accusation" above! And yes, thanks for such respectful dialogue!

Anne-Davnes Dusenberry Elser at 8:07pm October 3
I worry about the Christian Right thing, too - but I don't think things would ever get that bad. It would be too much like the Holocaust - just the other way around. I don't think the american people would stand for it. Words like faith and morals and tradition send a shudder of fear through a lot of people - and for good reason because we're all sensitive to others throwing their religious preferences down our throats.
I was pleased to hear her talk about tolerance, diversity and respect when it comes to gay marriage. It looks like neither party wants to advocate changing the constitution and redefine marriage - which I STILL don't understand. I think that's a human rights issue that all committed couples deserve.
Posted by Anne Elser at 10/04/2008 06:34:00 AM

and what's all the crap about listening and being respectful and not always having to be right?