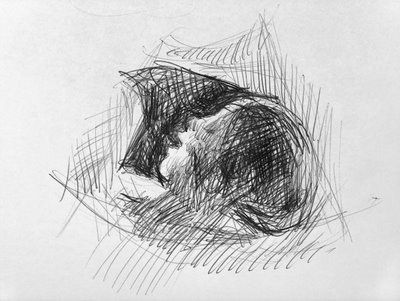 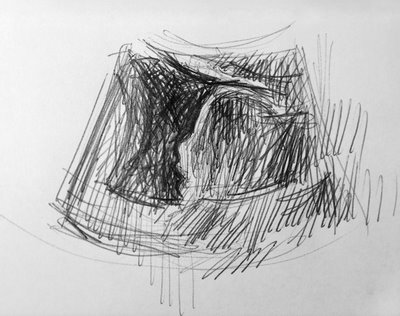 ~:A L M O S T • T H E R E:~I drew these little pictures of Bimp this morning from a couple of ultrasounds we had done of him when we first arrived here at Northside.

It has officially been a month since arriving.

And since then, I've had two things wear out:
1) My ID arm band (the adhesive actually wore OFF)
2) My signature. Seems the papers they had me sign upon being admitted expire after a month. So I spent a little time this morning adding my initials to all my signatures and re-dating everything. Kinda depressing.

Remember nurse Shawna who was obsessed with my turds? Well, we finally got to her. She was my night nurse THREE times in a row. The second night and after your stellar suggestion, Sarah, of describing my turds in detail, I think Doug and I won. Er, at least I stopped being embarrassed by the question. Probably a little of both.

Sure enough, Shawna walks in to say hi and asks the all the same questions in the exact same order, then pauses after a deep breath and asks if I've had a bowel movement today. This time I smiled instead of frowned.

"Actually, Shawna. I'm kind of a rock star in that department. I've been taking extra fiber since becoming pregnant for every good reason you can think of."

Then Doug chimes in, "Yeah, she's shitting book ends these days, let me TELL you!" And he went on to explain what a good pooper I've been. "Up to two pound turds, even!!" And I just smiled at him and she smiled at us and it was actually quite funny.

I have learned an important lesson here. When in doubt, TALK IN GREAT DETAIL ABOUT YOUR POOP. That always eases any tension in the room and the nurses seem to LOVE it. They even seem to stop asking personal questions.

Shawna turned away then, from our discussion of poop to pictures of Bjorn on the wall. We ended up talking about her puppy, BjornMouse, the picture of me baking the cake, the little hat and sweater I was knitting Bimp, how much she liked the way I dressed and all things not related to my poop. So it was actually a nice evening.

Instead of poop, I refer to my tommy-gun farts.

Anne,
exquisite little drawings. Do more! Do many! .....in between nurse interviews.

i'm so happy that my suggestion worked for you. i've found that the subject of poop does a lot of good things if given the chance. i even think that strategy could create peace in iraq. maybe i'll call george and tell him about it.