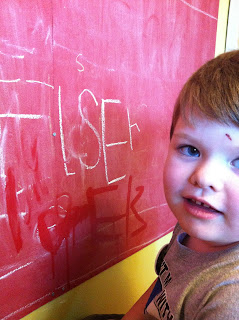 Following Martha Stewart's recipe for Custom Color Chalkboard Paint, I made Anton this cheery red chalkboard for his bedroom last week. I used two quarter-inch-thick sheets of masonite, a flat Behr red and unsanded tile grout. It was super easy. After making pilot holes in the corners of the masonite and the walls, I installed the boards snugly against each other for a big happy red surface in which to write. He LOVES it. And it's a great color fir his bedroom. 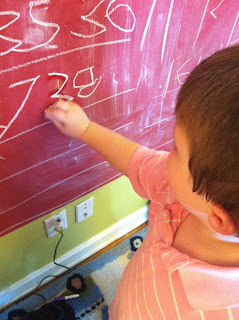 Anton gets a "sticker" reward for every set of letters or numbers he practices. Stickers earn him toys he wants. And instead of slapping on a star, he fills in a number on a sheet. 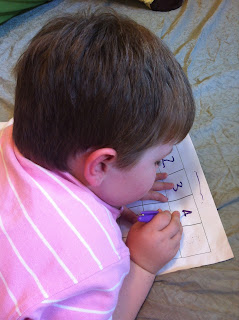 The SPD has gotten in the way of his natural impulse to make marks on paper - so handwriting has become an issue. Since he'll be in Kindergarten next year, we are working extra hard at getting him comfortable holding a pencil.

The giant chalkboard in his room, and some guidance from his OT (Kate Drummond of About Play),  Handwriting Without Tears, and his teachers at Coralwood, Anton is doing fabulously well.

HWT suggests you use short nubby pieces of chalk so tiny fingers have to "pinch" the chalk, forcing them to hold a writing utensil the best way to gain optimum control. We also use tiny piece of dampened sponge so I can write a letter for him, then erase/trace it with the sponge (drawing with water) and then Anton traces my wet letter with his own piece of chalk. Thanks HWT!
Posted by Anne Elser at 3/20/2012 08:02:00 AM