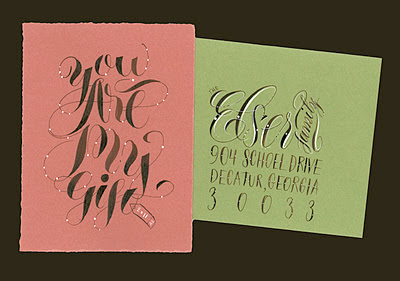 Wrapping up the production of this year's Christmas Cards. It's been my most labor intensive yet. My list almost hit 80 and I've just about reached my limit. Have sworn (please remind me of this next year) that this is the last year of making them by hand. Counted up the hours and I put 2 solid weeks of work into these. Time well spent, BUT dang. A sister's gotta get some rest and a gift that comes from love shouldn't hurt.

SO, next year I will get them letter pressed! Will be working with Jon at Vote For Letterpress. Really excited!

A note about the meaning of this year's card "You are my gift." My attempt to deepen the meaning of Christmas each year continues and this year was no exception. Trying to understand the meaning of generosity, a gift, grace and forgiveness... it's a journey. Right now, as I understand it, the most generous gift I can give is something made from my hands. That is where I place my value and where it stands in grace. So instead of simply signing my cards with a signature and date, I turned it into a price tag, stating its value. Originally, I had a little box with a bow at the bottom of the card. My friend Mary Ferguson (really smart lady) suggested the tag. She was spot on. THANK YOU.

An additional note: I've realized that the stocking stuffers and manic search for the perfect gift to ask for and the one to give is not only the card itself, but the RECIPIENT. My gratitude to the people who I share my life with has grown SO MUCH. My new friends, the students, mentors, buddies... even adversaries are all an offering for me to accept or push away. The content of my life is beautiful - even that which is at times uncomfortable, is a gift. All of it a gift.


These Christmas Cards are a big thank you, a big nod of gratitude to everyone who has heard me and let me know so.

About the materials, I used Paper Source's Moss green A2 envelopes and a hand torn Canson red textured paper (it's a brick red and I can't remember the name exactly.) These were inked with a Nikko G nib, white Dr. Martin's India Ink and Liquitex Acrylic Ink! in transparent raw umber. To achieve the heavy downstrokes on the card, I passed over each twice while the ink was super wet. Learned this technique from Barbara Calzolari this summer at a Pointed Pen Variation Calligraphy workshop at Binders.

The look and feel of these cards were heavily influenced by two calligraphy workshops I took this summer, both in pointed pen, from Barbara Calzolari at Binders Art Supply and from Heather Held , hosted by FOTA (the Atlanta Calligraphy Guild called Friends of the Alphabet.)

Beautiful Anne! Yes, next year do the letterpress : )