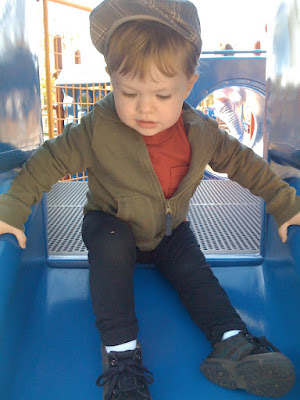 Well. I voted yesterday. Early. Stood in line at the local playground campus at Brook Run for 1.5 hours and it was winnnnndy and cold! So I called Dad and asked him to deliver a White Chocolate Mocha from Starbucks. When he arrived, the crowd applauded him for such a chivalrous act. I sipped in comfort for the rest of the morning. By the way, the picture of Anton relates to this article for one reason: he's cute and is ON a Brook Run playground ride. :)

People were remarkably well-behaved in line. I heard no jabs at either candidate, which pleased me. At least I could cast my vote in relative peace. You all know I voted for McCain, not because I dislike Obama or really like McCain, but because I'll always vote for the more balanced candidate of the two. But it strikes me that this election is not about balance or logic or anything involving the left hemisphere of our brains. Rather, it's an appeal to our emotional state as a country, that seems to be winning the vote. Obama is the more charismatic of the two, he's got the right tone, gesture and his delivery is beautifully mastered.

The country is in such a state of panic, and needs to be comforted. That's why a positive message of HOPE and CHANGE sits well with us. What people do NOT want to hear is what "good workers" we Americans are and that it will take a lot more work from us to pull each other out of this mess. People want to be saved, not encouraged to work harder. They want to believe that the jobs they have are there own and belonging to them, not the right or property of their employer. I believe differently, it's not my job, it's my employer's job and I am blessed to have it.

Oh how I wish McCain had a better speech writer.

But I will admit, that if Obama wins the election, that he will heal many emotional wounds from a great number of Americans. And right now everyone just wants to feel a little safer and prouder of our country.

I was at the bank the other day and an African American teller was helping me. The TV was playing pieces of the latest Obama speech and the look on her face was priceless. "Wouldn't it be wonderful...?" she said. I agreed. She said she was making a scrapbook for her daughter about Obama's rise. I thought it was a great idea. So if he wins, I'll be thinking of that little girl. And her mother. And I will support my president as best I can.
Posted by Anne Elser at 10/28/2008 07:50:00 AM

Anne, You express yourself so clearly, & with such sanity. I'll be standing in line there this week, too, & hope to enjoy the same peaceful coexistance with my fellow voters. I can't believe that mean-spirited rants or e-mails have much positive effect on anyone, other than, occasionally, leading the recipients to do some research & discover the truth. Your well-thought out, gentle statements, however, are much more convincing.
BTW, Anton is just too beautiful!

Well said as usual Anne. I shall feel calmer when it's my turn to wait in line. I too will support the next president and am, quite frankly, ready to get nov 4th behind us so we can move ahead. Oh how I will miss the SNL skits! Good golly, could Anton get any cuter? :) Barb

i grew up with a lot of the far right and was pretty right myself for a really long time. then i was submerged into the creative community and design schools and cities like new york where right-wingers are about as popular as cancer.

people on the far left are just as irrational as those on the far right. being around so many different kinds of people who don't think the same as me has been one of the greatest experiences i could have ever hoped for.

the far left has pushed me over from my kind-of-right-of-center spot, but it hasn't brainwashed me. it's just put me more in the middle. in a place where i can more easily see both sides.

things have gotten really kind of out-of-hand in washington--political parties aside. i think that's something everybody can agree on. personally, i feel that things have gone too far right at this point. not pat-robertson-psycho-right, just too far to the right in general. obama isn't going to be able to swing everything back to an unreasonable spot on the left. i think it will fall somewhere in the middle. and then we'll be bored and need another change of pace.

these have been a very intense past seven years, i think, for everybody. we, as a country, have been through a lot of crap. peoples' lives are really chaotic--crime rates are climbling like crazy. i don't think that's george bush's fault. you can't blame one person. or even one party. it's just a culmination of very bad things in a very short period of time. and me, personally, i'm just tired. i need a second or two to process what the heck just happened. so that i can really think through my future.

you've said this before in our personal exchanges, about it being so great that there are two opposing sides--that that's what makes this country great. if one or the other party were the sole group in charge of all of us, we'd be up shit creek without a paddle.

thanks for being so thoughtful in all of this.

The last ten years have been coined as "the disaster decade." After 911, orders for soup and other comfort foods soared.

So the real question is "Whose face would look better on a Campbell's Soup can?"

This is the most visceral election I've taken part of.

thought this story kinda hit both sides, too.

i don't want no fight! i just thought it was an interesting take.

Anne, I'm glad we can coexist, and disagree, and be different.

And we can still make equally hot books.

Thank you for the conversation--let's continue, okay?

Me, too Katie! What you said at our dinner made a lot of sense to me and if I were you, I'd feel and vote exactly the same. I was thinking earlier today about how varied our (as in the greater "we") experiences are and how important it is that we all vote as our individual consciousnesses dictate. The vote needs to honestly reflect everyone's experiences.