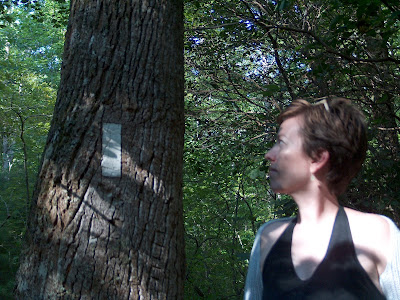 While we're on the topic of cathartic poetry, here's another I wrote about my life out there with Tommy out in Albuquerque. No, it wasn't all bad. But being raised to not make a fuss and be a good girl made it real hard for me to get in touch with my anger.

Tommy took all the room in a house. His anger was big. His bigness overshadowed everything. Every time. And it was worse on vacations and holidays. Great timing.

This was my only Thanksgiving away from the family, while I lived out west with Tommy for three years, trying to save him. Ridiculous to think that I could. But I was sent as a peace offering, mostly my doing. I was sent to fix him.

I tried to start a seed garden. Every tiny green leaf that emerged in a morning was eaten by nightfall.
I'd come home to him in a funk. Once he was out of work for months. He actually played so many rounds of solitaire, his deck was nearly bare, all the ink rubbed off with all that friction.

I had a cat from college named Gabby that I brought out there with me. Tommy laughed at the neighbors who told me to keep her inside because of the coyotes. So I trusted his advice. Listen to your big brother, Anne. She got eaten within a few months.

The "house" we lived in was a trailer out in the desert. It shook during the washing machine's spin cycle and every time he went into a rage. I'd drive home from work each day thinking to myself, "today will be different. I'll walk in and kiss him. And we will be brother and sister." That never happened.

When he took his life, we flew out to Albuquerque to settle his house, etc. Dad kept a small sample of his ashes with him in a little blue felt bag. We drove out to the mountains with his ex wife and son, Nathanael. We said a few words. Dug a hole. Buried his AT hiking boots in the ground. Nathanael shook out the contents of the bag onto his boots. Bits of bone poured over his boots and the hollow sound they made is something I'll never forget.

So this year's grief is all about me rocking the boat and allowing myself to get angry. Tell the truth about how awful he could be. That it wasn't my fault he was unhappy. It wasn't. Not one bit.

Seeds died in sand.
Coyotes ate the cat.
You rubbed out faces and hearts
with round after round of solitaire.
Sing to him, Mom said.
So I did.
And I failed.
Spilled truth in the trailer.
Whitewashed the brown paneling.

And I can’t save you,
Scattered on top of hollow hiking boots.