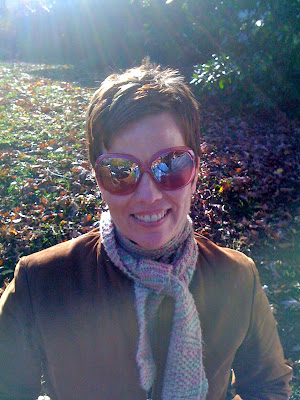 When I was little, my mother told me every dress I tried on with ruffles swallowed me in fabric. She liked me in more tailored and simple cut clothes. I did, too. As honest as that statement was, I took it to mean that embellishment did not look good on me. ANY embellishment. I could wear something that sparkled, but it had to be small and not overpowering. So every dress, earring, necklace, ring, scarf, hat, etc had to be small in size and not too flashy, else I'd be swallowed up and disappear. And worst of all, I'd look silly.

It wasn't until recently that I began to look deeper into the notion that I had an artsy but conservative sense of style. Well. Today I say FUCK THAT.

After a particularly deep session with Debra, I decided I needed a new pair of sunglasses. I had three pair at home that were scratched, some shade of brown and small. SMALL. Hrrrm. I had thirty more minutes to pick up Anton from school at 1:00. Across the street is a Loehmans. They've got a good selection of eyewear, so I flew in, picked out two pairs I liked, remembered where they were and after picking up Anton, brought him back inside with me to help me choose which pair.

I held out the two to show him and he shrugged his shoulders and went back to the rack. He picked out a large pair of pink Ray Bans. "I like these, Mommy."

I put them on my face and looked in the mirror. Oh yes, they were fun, but too big for me. Too loud. Too fancy.

Just then, a beautiful black man walked past me and said with a smile, "Honey, those look good on you."

That was god. Anton and my phantom stylist piped in long enough for me to take a second look in the mirror and buy those shades in the spirit of joyful confidence.

So here they are and here I am. These rose colored glasses are amazing. Not the kind that hides from the truth, but searches for it, redefines it and becomes it.
Posted by Anne Elser at 11/27/2010 05:13:00 PM

Email ThisBlogThis!Share to TwitterShare to FacebookShare to Pinterest
Labels: enlightenment

Awesome! Not only do they look awesome, but they are completely in style. Well done, good choice. ;)